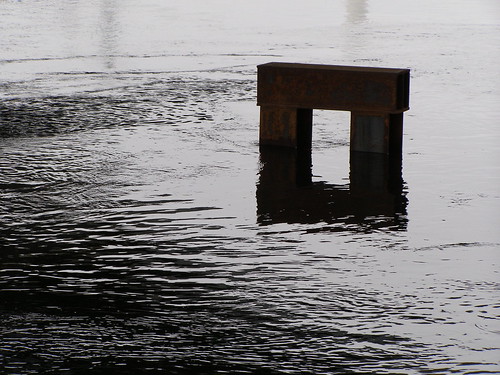 “Existentialism” (CC BY 2.0) by erix!
What a dramatic title, I know. Haven’t you figured out by now that I put my raw thoughts on here and just say random crap? I can be as dramatic as I want, or not.
Basically, not like I’ve never thought this before, but I guess as I’m plowing through my master’s I sometimes wonder if I was ever meant to be a musician. I absolutely love what I do and could not imagine my career focusing on anything else, but maybe it’s all a lie.
I often talk about how when I was in middle/high school and even undergrad to an extent that I always felt like I got the short end of the stick. Of course, my teachers would always try to be positive and encouraging and pull the “don’t compare yourself to others” card. I know I wasn’t the best player. There’s no question that the people who consistently beat me in competitions played with much more technical command than I did, but I still felt like there was value in the work that I was doing. I knew I wasn’t the best but I still practiced consistently everyday. I practiced and worked to the level of these “superstar” people even though I knew I wasn’t. I wasn’t about to be one of those complacent “I’ll never be the best anyway who cares” people. Granted, I know I should have been practicing more in high school and I potentially could have been a lot better, but I’m amazed at how much practicing I did get done in my crazy schedule.
Now I look back on it all and think that maybe not winning these competitions and not getting chosen for these awards was the universe’s way of telling me that I was not meant to be a musician. No one wants to say it to my face, everyone’s too polite. I hear of people at my undergrad school who played at an equivalent level to me who are winning the concerto competition and such. I should just let go of the past but it’s hard not to feel a little bit resentful. I can’t really help but feel a little “That could have been me if I was one year younger” yadda yadda. When I entered those competitions, I had to compete with really high level violinists and pianists. Now that they’ve won those competitions and can’t enter anymore, it opens up the floor for others, and I’ve graduated so I will never get my chance. If I was still at my undergrad school, who knows, maybe I would have been chosen, or at least been selected to advance to the finals. Or not, because clearly the universe hates me.
Now here I am in the final stretch of my first year of master’s. I have one year of school left in the foreseeable future. An Artist’s Diploma is not out of the question, but definitely not right away. I feel like I haven’t really accomplished enough during my schooling to go “out there” into the world and I honestly don’t think any miracles are going to happen in the next year or so. I want to get my master’s. I’ve come too far to just throw it all away, but is it worth fighting with the universe? If the universe, or God, or whoever is out there just really doesn’t want me to be a musician, then why am I wasting my time? I’ll never be one of those “superstar” players even  if I decided to commit to practicing 8 hours a day now.