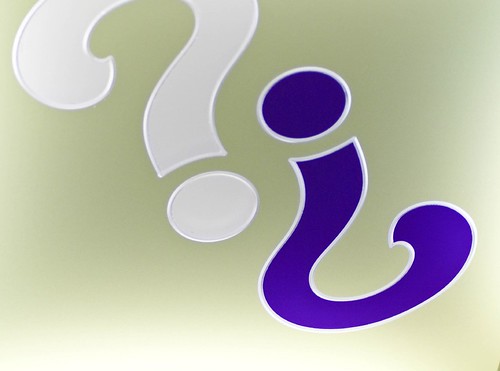 “Questions?” (CC BY-SA 2.0) by  Valerie Everett
What a crazy and terrible thing to be thinking about, you might say. After all that hard work and emotional trauma to get to the position that I’m in now, you’d think that I could finally relax. Well, you thought wrong.
As excited as I am to begin this new chapter of my life, and as much as I think it is the next logical step in my musical training, I am a little bit skeptical of it, which I’m sure is normal. Part of me wishes that I waited until I was a better player musically and technically. My undergrad school offered a one year diploma program (although most people do it in two). Typically people would take it after undergrad while doing grad school auditions or use it as a pre-master’s program before starting the master’s program there. Occasionally people took it after master’s as a way of staying in school and taking more time to decide what to do with their life.
I considered doing this diploma program for a while, all the way until the beginning of fourth year. Once all the drama and emotional struggles of the school year kicked in, I soon realized that I needed to get out and that my time at that school was coming to an end. There was no way in hell I was spending one more year there. The only other options would be doing a gap year, or a similar diploma program at another school. I’m still at the point in my life where I need to still be in school, I need to keep studying and practicing. A gap year would not be conducive to my progress. I figured that if I knew I wanted to go for a master’s anyway, I might as well do it now.
Now that I’ve been accepted to a master’s program, registered for courses, found my place, etc., now I’m questioning if it was the right decision. I feel like I’ve always been “behind” or “inferior” to other musicians my age. I feel like only in the past four years have I started to make progress, but it’s not enough. Everyone else made progress as well and since they were already so far ahead of me, I will never catch up. Four years of good practice habits and a great teacher is not going to make up for 12 years of poor practicing and a not so great teacher. I only have two years of school left to get my sh!t together and then I’m out in the world. That’s scary! If things keep going the way they are now, I won’t make it. My only hope is to take an artist’s diploma (or something) after master’s, but after two years I might be done with school.
Where I am now musically and technically is where I should have been when I began my undergrad. It shouldn’t have taken me a whole undergrad to learn how to practice efficiently and address my technical issues that I’ve had for years. I came a long way in my undergrad, but it wasn’t enough. I should have started it the way I am now so that I could make some real progress. Now I feel like I could make some real progress, but I only have two years of school left. Whether I like it or not, it’s looking like I need to take an artist diploma if I have any hope of doing anything musical with my life. But there’s also that part of me that thinks that it may already be too late. As meaningless as university competitions are, I can’t help but think that never making it to the final round of the concerto competition was a sign. If I can’t even make it to the final round of some small competition at some small little school in Canada, then why do I think I have a chance at winning a national or international orchestra audition?
I think about people that I know that are starting undergrad in the fall. They are in a way better position than I am. They play at the level that I do now (if not better) and clearly have effective practice habits down to a science. If they can do that already, it’s scary to think where they will be in 6 years after they are done their master’s.
I used to believe that having  a strong work ethic was all that mattered, even if you weren’t the person who won all the competitions or the one that everyone thought was the greatest. If you were consistent and worked hard, you would be successful even if it took many years. Now I think that’s something that I told myself and teachers told me to make me feel better. I’m too far behind and I’ll never catch up even if I practiced 8 hours a day.