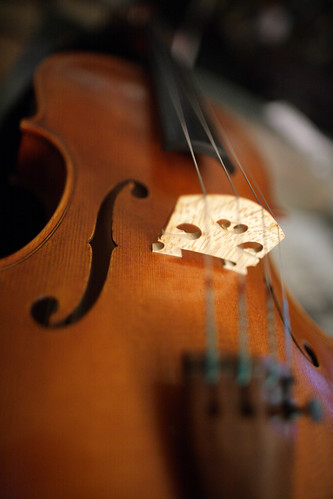 “Viola” (CC BY-NC-ND 2.0) by  ccho
Hello everyone! I haven’t forgotten this exists, I’ve just been busy as you can imagine. I actually finished my last audition 2 weeks ago now and I was going to write here sooner but just never got around to it.
A lot has changed since I last wrote here. My entries this [academic] year have been mostly rants about how unfair the world is and how much I hate life. I can proudly say that for the first time in almost a year I don’t feel that way anymore. It’s almost silly how good I’ve felt these past two weeks.
To keep my anonymity in this blog, I won’t mention the schools or cities that I auditioned in, but I will say that even as soon as I arrived for the first audition, I immediately felt 1000 times better. Four months before that point I considered cancelling it all and not even continuing in music. It was a huge step for me to go out into the world (well, still in Canada) and go visit these schools and play these auditions. I had some lessons with prospective teachers. They all had nice things to say about me. It’s one of the first times I’ve had lessons with new teachers and they didn’t harp on intonation, and actually, in some cases complimented it! This is a huge step for me as it’s something I’ve been self-conscious of for over a decade. I do need to work on my right hand technique a lot and all of the teachers did point that out and showed how they would work on it with me. I didn’t feel like it was condescending, which is usually what happens.
It was also amazing to meet up with friends along the way who helped me get lessons with all the teachers and showed me around their schools. There was one of the schools in particular that I felt the most like I belonged there. I had the most friends who went there and as soon as I walked into the building, I felt like I went to that school. Needless to say, it is my first choice. I am still weighing the pros and cons of the schools and have some time to make a decision though. I am also pleased to say that I’ve been accepted into that first choice school as well! I haven’t heard back from the others yet, but maybe it’s a sign that I should go there. Who knows. I’m just honoured to have been accepted into a Master’s program. A few months ago, I thought I’d never get accepted into a Master’s program and that this was the end of my music career.
In these past few weeks, I’ve been enjoying not practicing as often. I took an entire week off of practicing and it was actually amazing. I went for walks, went to hot yoga, and tried to explore some non-music hobbies. I’m also working on learning French in Duolingo as master’s programs usually require a second language. If I start now, I’ll definitely be able to pass any proficiency test in September.
I feel like this blog really doesn’t serve much of a purpose now that things are going well in my life. I don’t really have anything to rant about at this moment. Of course, that will change when grad school begins haha. I’ll be sure to talk about my grad school experience on here when that begins. I’ll have a whole new group of people to passive-aggressively rant about on here.